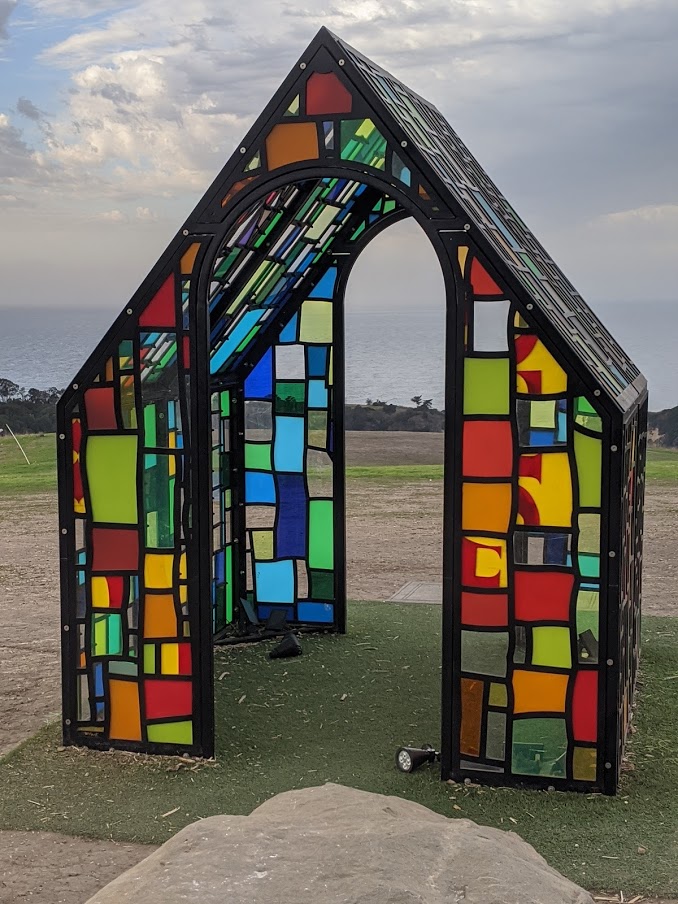 Whatever else is true, Inauguration Day is about new beginnings–for the country, of course, but also for individual citizens. This feels like an opportunity to push a reset button, and I’m taking advantage of it to restart this blog. I’m hoping to be inspired by the speeches and ceremony that will happen in Washington, but yesterday I had a more personal moment of illumination and that’s where I want to begin.

I’d read about an art installation called Camouflage House somewhere in a nearby park but I didn’t make an effort to see it until I learned it would be dismantled the day before the Inauguration. Early yesterday, the dog and I set out to take a look. We wandered a bit before we spotted it—a brightly colored structure that looked like a child’s drawing of a house with straight sides and a sharply peaked roof.

Made of salvaged acrylic assembled to look like stained glass, the house seemed simultaneously playful and serious, maybe even sacred. At least one reviewer described the structure as a person-sized, mini-cathedral. In some settings, it’s been lit from within but this park closes at sundown, so the lights had been dismantled.

A short message from the artist, Tom Fruin, appeared on a sign beside the house: “The House sculpture can be seen as a place of refuge and a stand-in for our hope moving forward. Its shape is a generalization of a home, while its dramatic coloration is the opposite of Camouflage—it is an act of standing out with warmth and brilliance.” In interviews, Fruin has described the house as a space where people can retreat to reflect on what’s happening in the world.

The sky was overcast yesterday, so the colors of the house were muted. Like the landscape around it, the structure seemed dusty and a little forlorn. If I’d had a broom, I would have swept the artificial turf on which it stood. Instead, I stepped through the open door. The kaleidoscopic roof and walls framed a spirit-soothing view of the ocean and the distant islands. The panels on one side of the house are vivid red and orange; the other side is intense blue and green. I did a little deep breathing, feeling as though the house was gently encouraging me to engage with every color.

This is the spirit I want to cultivate in this blog. For the past four years, camouflage has been a way of life for me and many others. I’ve kept a journal and spoken to friends, but I’ve been reluctant to put my work into the world. Mostly that’s because I don’t care to attack or be attacked. What I want to do is reflect, mostly on contradictions, the place where both/and feels more illuminating than either/or. This Inauguration Day embodies that dynamic. As Americans, we are  hopeful about coming together and apprehensive about what divides us. We will watch a ritual that is deeply familiar and distressingly different. We are starting fresh and there is unfinished business.

Writing is how I’ve always made sense of myself, my experience, my times. At this stage of my life, I’m unsure about whether what I have to say will make any difference to anyone else. Still, Camouflage House gave me the nudge I needed to become visible again. I suspect this is because I didn’t see it on a perfect sunny day when, undoubtedly, it would have been luminous and intimidating. Instead, I visited on a good enough day. The house, like me and for that matter my country, was a little subdued. And, yet, the house did exactly what it was intended to do—inviting me to reflect on a structure made more beautiful because it was constructed from salvaged, imperfect bits in many contradictory colors. Sharing the thoughts that Camouflage House inspired is my declaration that I intend to shrug off camouflage. This is my small act of standing out with warmth if not brilliance, my intention to inaugurate a new era of curiosity, engagement and goodwill.